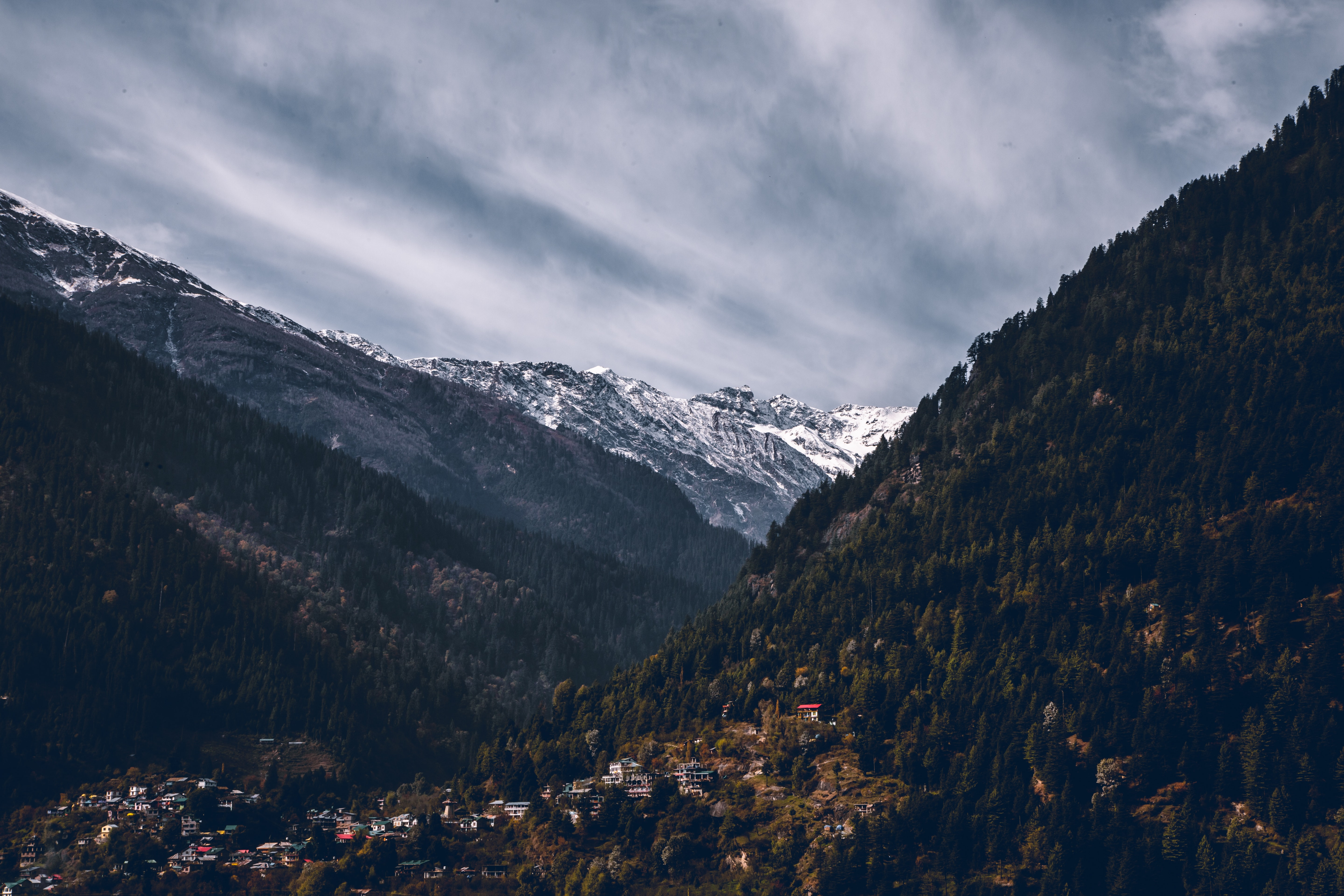 Manali is a town in Kullu district located in the mountains of Himachal Pradesh near the northern end of the Kullu Valley in the Beas river valley. It is famous for its Buddhist monasteries or shiny gompas. Visitors from the whole world come here to see the beautiful view which gives a heavenly feeling. The landscape covered with snow and the chilling atmosphere with snowfall from the sky just feels awesome.

The best time one can visit Manali is from October to June when bright colorful flowers are in full bloom and the temperature ranges from 10 - 25 degrees Celsius. From December to February the temperature is almost below 0-degree Celsius and the snowfall makes it heaven giving you a magical experience

It is a side valley at the top of the Kullu Valley. The valley covered with snow gives a beautiful view from the top. Various sports are offered at Solang valley such as parachuting, paragliding, skating, and zorbing.

Hadimba temple is built on a rock which is believed to be the image of the goddess Hidimba herself. It is surrounded by beautiful cedar forests. Its different construction style with its wooden doorways, walls, and cone-shaped roof make it a wonderful place where one can have peace of mind.

The majestic Manu temple is dedicated to the sage Manu, who is said to be the creator of the world and the writer of Manusmriti. The temple is one of the major attractions in Manali and it is believed that sage Manu meditated here after stepping on earth. The travelers are advised to wear dresses covering the knees and shoulders while visiting inside the temple.

Manali has several spectacular monasteries that represent the rich culture and history of the Tibetan people settled here. The Gadhan Thekchoking Gompa and the Himalayan Nyingamapa Gompa are the two main monasteries where a large number of tourists visit. These Tibetan Monasteries also run a Thanks School of Arts and a Carpet-weaving Center which preserves the ancient Tibetan art. There are paintings inside these buildings that depict events from Lord Buddha's life. The Kalchakra i.e., the wheel of life fixed on the wall of the monastery shows the human life cycle. The Buddhists believe that rotating these wheels gives you salvation.

Rohtang is a snow point in Manali which is the best destination for the thrilling activities. It offers numerous activities to its enthusiastic tourist. Gondola (Cable Car), Paragliding, skiing, Quad, or ATV are the sports that magnetize various tourists from the globe towards Manali. Rohtang pass is open from May to November

Activities to do in Manali

River rafting in Manali can be done throughout the year in the Beas river. However, the river is in full swing during the monsoon season. Rafting in extremely cold conditions gives you a thrilling experience.

Skiing is one of the adventurous activities done in the Solang Valley of Manali when the earth is covered with snow. This is a one time experience which one can have here.

It is one of the most thrilling things to do in Solang valley. There are two jump stations with one on a higher level and other on a low level. Watching nature through the air gives you goosebumps.

The most popular camping sites in Manali are Beas Kund Camp, Raison, and Shoja at high altitudes. Apart from these, there are various camping grounds accessible from Manali which include the Pulga, Malana, Kheer Gangain in Kullu. The Solang valley, Kothi, and Manali camp are the best places for camping with your loved ones enjoying a bonfire and delicious food.

Old Manali market, Manu market, Himachal emporium, Tibetan market, Bhuttico, and Mall road are some of the popular places in Manali where you can have various items to empty your pockets. Things available for shopping here are:

Manali is famous for varieties of street food available here such as: